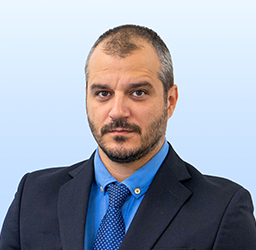 In our daily life, the defender lives, the attacker survives
Home | Konstantinos Vourtsis

Konstantinos Vourtsis started his partnership with Manifest in 2020. From the position of Hard Services Manager, he is responsible for profitable Hard Services, which have been delivered in the right quality and at the agreed time resulting in satisfied customers.

His goal is not only the continuous improvement and increase of services to existing and new customers, but his goal is to see the smile and deep satisfaction on their face in every phone call and in every meeting.

His work experience began in 2005 in construction, while from 2009 he was involved in the field of maintenance and in general with the Facility Service, working in companies such as Engie and ISS, as a facility maintainer and then as Supervisor & Facility Manager.

Konstantinos has studied Electrical Engineering at the Technical University of Larissa and has attended seminars, such as the “smart home” by Legrand, selection, operation, maintenance of power generating pairs by Petropoulos, and has a certificate of operation of refrigerants & refrigeration equipment.